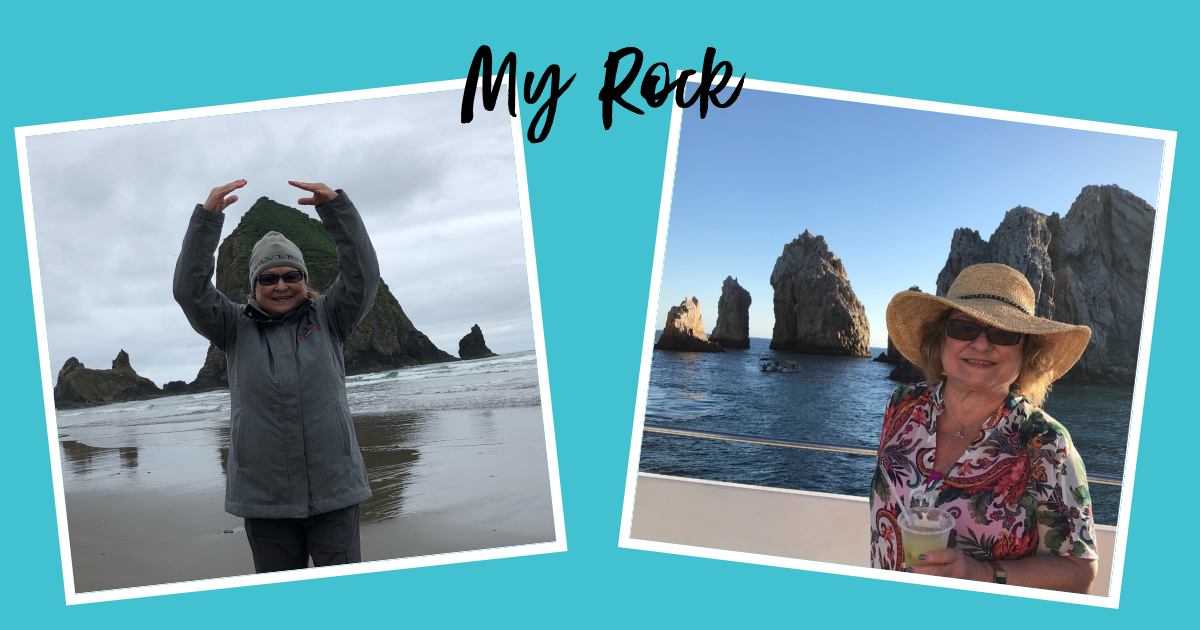 Hay Stack Rock and the tip of Cabo San Lucas are iconic rocks that I have photographed.  There even is a joke that I framed a picture of me in front of a rock.  My friends laughed and pointed out that one would not be wearing a tropical shirt and a sun hat in front of Haystack Rock in Cannon Beach Oregon.  Any pictures of me in front of that rock I am wrapped in a parka, barely peeking out from under a hood.

However, there are no pictures of me in front of the rock that is most important to me.  It is an outcropping on the beach in Laguna Beach at the end of Oak Street. I call it “my rock”.  I lived behind an alley across the street from Coast highway.  (In Laguna Beach, the Pacific Coast Highway is called Coast Highway, as is well known by the locals).

This rock was large enough for me to fully lay down on and absorb the sun. The sun that could heal my sorrow, my fear and even celebrate a success.  Even on a cloudy day the rock absorbed the warmth of the sun. The rock helped me through a romantic break up I was sure I would never recover from.  I meditated on that rock when I had to make decisions.

However, the most meaningful time on that rock was the time when it looked like I might not get to finish law school.  I was in the deepest despair.  (I was humming Mood Indigo, “You ain’t been blue, no no no till you’ve had that Mood Indigo”.)  I cried.  I silently screamed at the universe.  The rock did not judge when I brought a Bloody Mary for breakfast and a Margarita for lunch. My life was really over.  The student loans were on hold; I didn’t know how I would pay my rent.  My future was indeed bleak.  Then the skies opened up for me and the sun came out.  I was living in a shack by the beach and pursuing something that I had wanted for a long time.  Life had been good for me. Now choruses of “I Will Survive” went through my head.  I became determined.  I knew what I had to do next. I had to build up my courage and believe in myself. I was reminded of other times in my life when I put on my grown-up clothes, faced adversity and prevailed.

I took on the law school administration and prevail I did!  I even saved several other students who had been caught in the same administrative malaise trap. Yes, I did complete law school. Yes, I did pass the California bar.  Just like I promised my rock.

Years later, as I was living by a lake in Washington State instead of by the sea in California, I found out that I did not have sole ownership of that rock.  I met a woman who still lived in Laguna Beach.  Not only did she know about my rock, she considered it HER rock. She had commissioned an artist to paint it and the painting was above her bed. She sent me a picture of that painting.  I was happy to share my rock with someone who appreciated its magic

I have not returned to my rock and I do want to visit it.  But my mission at present is to find its replacement. There must be a rock, a bench, or a garden step somewhere close by that can fill the purpose. A place where I can meditate, cry, problem solve. Yes. Today I will find the rock that’s will sustain me in my present life

Do you have your rock?  Perhaps you can join me on a quest to find a magic place in nature that sustains you.

Two pictures of iconic rocks. Not “my rock”