Manifestation and Other Woo Woo Stuff

I was listening to an audiobook today in which the author talked about manifestation and all that woo woo stuff.  She approached it with amusement but yet a touch of seriousness.  She pointed out that one cannot just sit poolside and manifest a great job, a lover a new car.

Funny story for another time but I actually do know a person who manifested all of the above poolside.

Her point was that work needed to be done but you still need clarity on exactly what it is you want.  I got to thinking about manifestations in my life. Times I can now look back on and marvel.  Many of these happened way before we had language for this.  Sometimes we called it lucky coincidences or even magic.

Before there were today’s gurus there was Napoleon Hill and his book Think and Grow Rich.  It is easy to make fun of the title now but this book really is the grandfather of today’s movement.  His point was that in order to have something you  need to be clear about what it is.  But it doesn’t always have to be that overt. I have had many incidences of things “just happening,” and so have you.  Think about it.

Many many years ago my then husband and I visited a charming Southern California Beach town.  I thought about how I would like to live in such a town. But, I wondered, how does one earn a living in a place like this.

About twenty years later as I was walking along the beach in the place I was living, Laguna Beach, I had a flashback to that visit.  There I was living and thriving in that very town.  How did that happen?  I did not state an intention back then of  “Someday I will live in this town.”  It just happened.  Coincidence?  I think not.  Here is a picture of “my” beach and my rock.  I spent many hours on that rock commiserating, celebrating and even crying.  Just to anchor the magic story of that rock:  a few years ago I was attending an event in my current city and met some folks from Laguna Beach and I told them about my rock.  The wife told me it was her rock also and she had commissioned  a photo that hung in her bedroom which she shared with me. 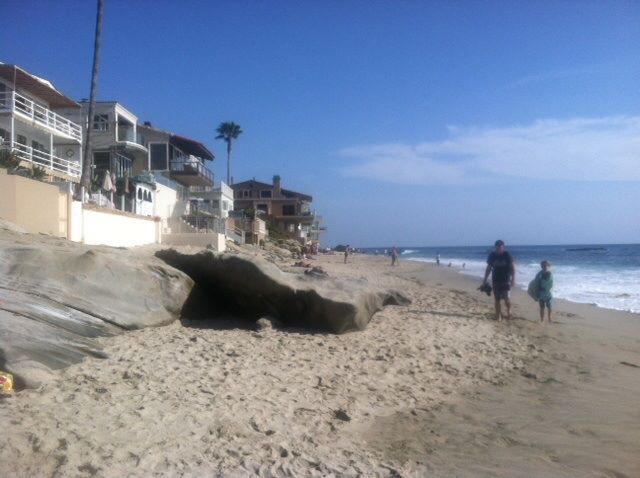 Many years ago I was working as a program director and was observing one of our programs.  The thought struck me that someday I would be presenting that class.  That manifestation did not take twenty years.  I was teaching the class only two years later.

These were all before we formalized the process and named it.  But the phenomenon was there all along.

Think about it.  When did you have a vision?  A fleeting thought that later came to be?

Can we formalize the process?

Many think so.  I suggest you explore affirmations, vision boards, shouting to the universe or merely giving words to your dream.

Try it.  You may find it is not so woo woo after all.