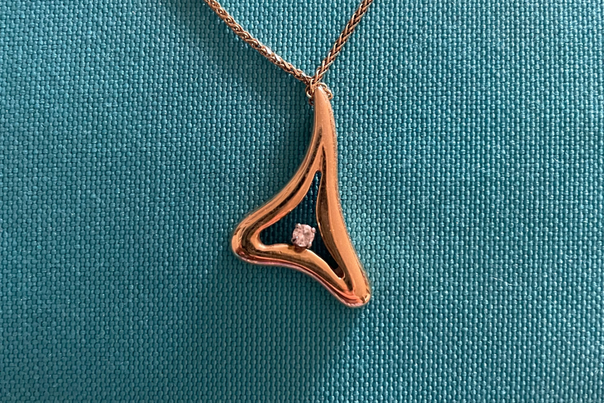 I didn’t really lose it. It was just put away for a long time. I don’t know when I found it again or what made me even look for it. After all, I had more exciting necklaces to wear, and the simple little gold pendant was not meeting my fashion sense at the time.

Now it is my signature piece.

A relatively small gold pendant with a tiny diamond. I just knew I needed to keep wearing it when I found it, as it reminds me of my life. Many years ago, I was going to my then-husband’s high school reunion. The former girlfriend would be there, and I had to look spectacular.

I met with a fashion consultant at a high-end store to get just the right dress. Surprisingly the right one wasn’t all that expensive. She wanted to accessorize it with a necklace. It was a large piece that would certainly get attention, but it didn’t seem right or suit my mood. I stopped by the jewelry store across the street. I don’t usually go into jewelry stores, but I was drawn to it.

The pendant called to me. It would be perfect. However, it was way beyond my budget. It came on a gold chain. “How much is it without the chain?” I asked. I could add my own chain. A cheap one, probably.

The price was still beyond reach for a non-working wife whose husband was just starting his career. After the shopping trip, I was to meet my husband for cocktails. He arrived after I was seated and reached in his pocket to pull out a wad of currency.

Someone just paid him unexpectedly. “Is there something you would like to have?” This was so out of character for my husband, and I was speechless. It was just enough to buy the pendant. (I don’t remember if it included the gold chain).

I happily wore it to the reunion. And perhaps for some time later. Then life happened. Parenting, divorce, moving—several times. I forgot about the necklace. During a particularly dark period of my life, it appeared. It wasn’t worth enough to pawn, so I kept it. Then it occurred to me – this piece was a reminder that I can have anything I want. It can magically appear for me. I have worn it ever since!