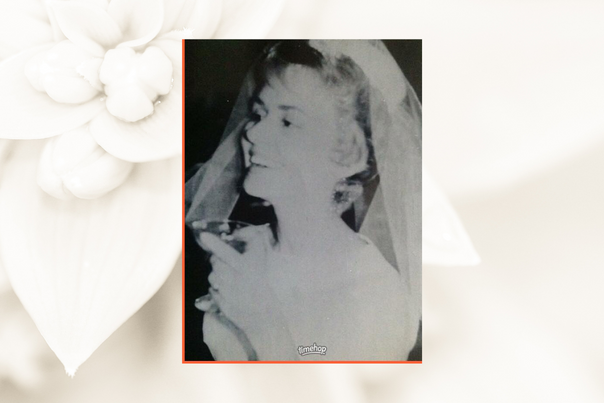 1962 is known by most people in the Pacific Northwest as the year of the Seattle World’s Fair. You know, the Space Needle, the arches at the Science Center; the fountains. I never made it to the world’s fair. Although the world’s fair did play a role in what I will call my “funny wedding.”

Spring is the time of year social media is full of happy brides in elaborate gowns surrounded by family at beautiful wedding venues. Mine was not like that. In fact, I had no intention of a wedding that year. I was just going to visit my fiancé at his Air Force training in Texas.

Just a visit. I had just completed my student teaching and intended to return to complete my degree in the fall. I had been given the traditional diamond engagement ring the Christmas before. My fiancé was now an Air Force Officer. He was attending training at Shepherd Air Force Base in Wichita Falls, Texas. He suggested I take the train to come to visit him. The train? Yes, my children, people actually traveled by train in those days.

Spokane, Washington to St. Louis to Dallas. This was when you dressed in very professional-looking clothes as you took the train. I was 19 years old and had never traveled.

Maybe a car trip with my family, but even that was rare. My fiancé met me in Dallas and showed me around the town. I just remember seeing (at that time) the very famous Neiman Marcus.

Then it was off in his Porsche Speedster with the torn convertible top to Wichita Falls.

His fellow officers attending the training program greeted me warmly. He had arranged for me to stay with two women Air Force Officers at their home. It would be way too scandalous for us to stay at the same place. Besides, I think he stayed in the bachelor officer’s quarters (BOQ). As I was introduced to his friends, they kept commenting about the wedding plans. I just laughed it off. No, I was only here to visit, and I would be returning to Spokane in two weeks.

Near the end of the two weeks, we went to the train station to buy my ticket home. The ticket office almost laughed at our request.

Didn’t we know that a Worlds’ Fair was happening in Seattle? No reservations were available until October.

October? How could I, a proper single woman, stay for that many months in a strange place? My Fiancé said, “I guess we have to get married.”  At first, I laughed it off. I was not ready to get married. I was only 20 and had not completed my college education. But, what could I do? This may be very hard to understand today. Still, the idea of two unmarried people staying together was just not done. It might even be illegal. Also, the Air Force would not provide housing to two “shacked up” people.

I had to accede. Okay. We get married. Remember, this was a temporary assignment for my fiancé, so we would need to get married immediately. Like right away.

We really did travel to the chapel. We reserved the date and talked to the chaplain. I, of course, insisted on a Lutheran chaplain to make my German mother happy. The males in the class started planning the party at the officer’s club, and my two female officer roommates took me shopping. No bridal gown—a sensible regular-length white dress. One of the women fashioned a little veil with tulle just like a regular bridal headdress. It really was rather flattering if you look at the pictures.

This was actually happening. I have to have a ring. A ring. The engagement ring came as a set, so he was prepared for me, but he had to get a ring.

He gave me his class ring to use for sizing, and I was taken by the women to the jeweler.   Looking at the rings, I realized I had no idea how much wedding bands for men cost. The jeweler seeing my discomfort, asked me how much I did have to spend. I showed him my paper money which I knew was not even close. The owner told his salesman, “We can’t let a young lady from Spokane get married without a ring for her fiancé.” And he sold it to me for whatever I had in my hand.

There was more preparation to be done. Got the license. The blood test. Most of which I don’t remember. For what, I don’t know. And yes, dear ones, there was the visit to the doctor for “family planning.” Now we are ready for the wedding.

On the day of the wedding, the temperature went to triple digits, and the air conditioning in the chapel had broken. The chaplain made the ceremony much more religious than my fiancé liked, but we both stood there in the heat, taking it in. I walked down the aisle, sweat dripping from my nose, wondering what I had done. How could it be undone? I couldn’t stop now, but maybe later?

Then the party. The officer’s club was decorated, there was a cake, and there were gifts. Really practical gifts. (Bed linens, a coffee pot, an iron.)  This was getting real. Of course, there was champagne. No one would ID an officer’s bride even though she was only 20.

The photographer was an older officer with a Polaroid. Remember those? He had a cast on his foot and hobbled around to get us our “wedding album.”

So there it was. I had a dress, a veil, a ring, cake, gifts, champagne, and photographs. Isn’t that what a wedding needs? We were off as husband and wife to my husband’s permanent assignment—Little Rock Air Force Base in Arkansas. And that is the beginning of stories for another day. Now is the time to laugh at the funny wedding and regret that I never made it to the Seattle World’s Fair.